Okay, so remember how I was looking for a fandom? I thought I'd mosey back into C6D (which I still adore and still want to be a part of), but then, um. I kind of fell headlong into Good Omens fandom (or back into it, since I was pussyfooting around the edges ages ago). Thank you, thank you, Neil Gaiman for making me remember how wonderful this story is (it's always been one of my favourite stand-alone books, and I used to have a copy autographed by both Neil and Sir Terry, which I left on a bus or train and no longer have, urgh), and thank you fic writers for reminding me how rich in story this fandom is. I eventually plan to write something, but now I'm just reading, reading, reading. And like I said, there's some really talented people writing for this fandom.

Here's a rec, and it's amazing, the best one I've found so far. So lovely and in-character and just really, really well written. It's a WIP, but she appears to be updating regularly.
I can't get the lj-cut thing to work (if the HTML has changed, please let me know how to do it), so I've stuck the link at the bottom.

Title/Author: The Name of the Star is Wormwood by LusBeatha
Fandom(s): Good Omens
Pairing(s): Aziraphale/Crowley
Rating: Teen and up

Hi, LJ, is anyone still there? I miss you! And I'm coming with a request for recent-ish (as in the last couple of years OMG) C6D fic recs! I'd really like to get back into fandom a bit, and maybe even write something, but I'd like to read something first! So, yeah, a heartfelt request for recs from a prodigal dS/C6D fangirl. Help? <3

If you're looking for a way to help with disaster relief in Oklahoma, here's a very tangible way to do so. Occupy Oklahoma has set up an Amazon registry listing items most needed by the tornado survivors/organizations on the ground helping them. There are all kinds of opportunities for providing needed items, from a hundred-dollar tent to a four-dollar rain poncho. Great idea, guys!

Does anyone know if there's a fandom for The IT Crowd? How many of you guys (who don't live in the UK) have heard of it/ are a fan? I can't imagine that there's not a fandom or at least fic out there. Enquiring minds wanna know.

Look how effing brilliant it is:

Clearly I am insane.

*I use it every time I make bread, which is at least weekly in winter.

**An essential part of my cold-weather cooking--I make soups a LOT during cold weather.

***What actually IS this, anyway?

Morning glories on the back porch--not fannish, but pretty anyway! No extra charge for the cute dog. 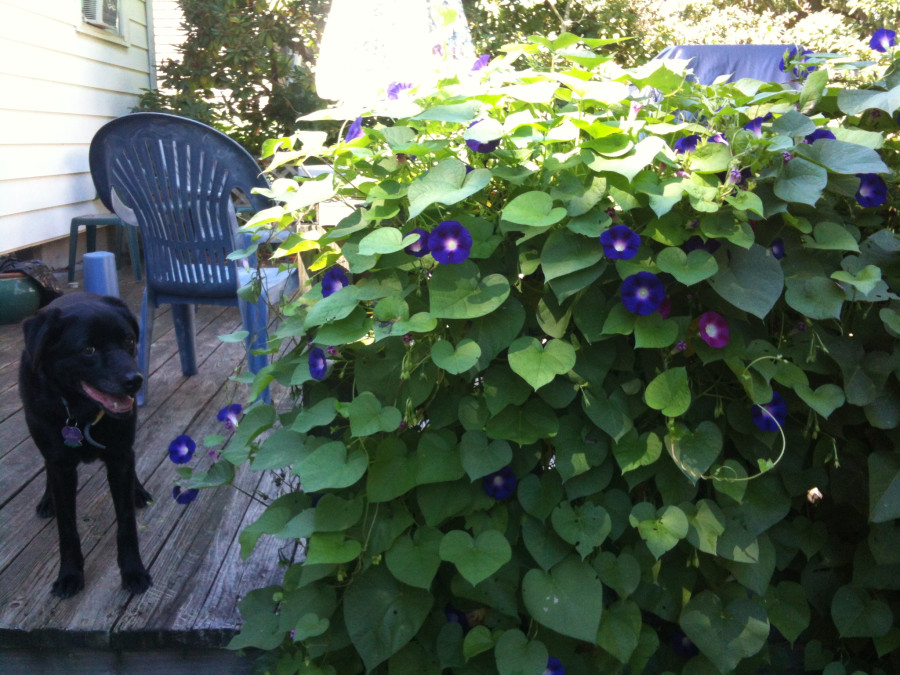 Hi, all. For those of you who still remember me, I am not gone, honest! I've been on hiatus way too long, and I want to come back! Working full-time now, and it's eating my life (OTOH, I don't have to be worried about bank overdrafts for the first time in many, many years).

So. Tell me what's going on, give me recs, give me news, inform me! I'm going to try to go over my very long flist within the next week and do catch-up and delete dead accounts (of which mine is definitely NOT), and get rid of comms I don't read (these are more political than fan-related, and I'm officially sick to death of US politics). But I want back into fandom--picking up new ones (OMG DEXTER. SOMEONE PLEASE TALK TO ME ABOUT DEXTER), but still firmly in C6D (which I doubt I will ever really leave).

So, you guys, whaddya say? Am I welcome? Is there still a seat at the fannish table? Can I come home?

In your own space, post a rec for at least three fanworks that you did not create. Drop a link to your post in the comments. See if you can rec fanworks that are less likely to be praised: tiny fandoms, rare pairings, fanworks other than stories, lesser known kinks or tropes. Find fanworks that have few to no comments, or creators new to a particular fandom and maybe aren't well known or appreciated. Appreciate them.

1. Rage and Weakness by

Yes, these are two stories, but they read more like two parts of a whole, so I'm listing them under one selection. Written when the few Fraser/Thatcher fics out there sounded like they were written by 12-year-old teenyboppers, Rage is a breath of fresh air--a thoughtful, well-laid-out portrait of Thatcher, presenting her as someone in fearful control of her emotions and personal life. When she is assaulted (physically, not sexually--this is not rapefic), she must begin to trust someone other than her own tightly-controlled self.

The second piece, Weakness, is a look at how Fraser and Meg (and also Elaine, who is significant in this story--always a good thing!) deal with their own self-identified weaknesses in relation to the events of Rage as well as in relation to themselves and how they perceive others (and each other). The author shows each character as very human with flaws and hangups as well as the intelligence and wisdom to begin to overcome them. This was one of the very first Fraser/Thatcher fics I read, and it's still one of my very favourites.

Links for Weakness can be found here (easy to locate amongst other stories that you might want to read, too--if anyone would rather have links to individual chapters let me know in the comments and I'll link them).

Summary: "It's 1987 and the Oklahoma cops have an unsolvable case. Fox Mulder, golden boy of the VCU, is called in to stop the murders of children across the state. What he finds takes him places he never wanted to go and forces him to make the pivotal choice of his life."

This is a really old story; I found it last year during a minor resurgence of my (also really old) X-Files obsession. This is X-Files pre-series gen; it reads like a psychological horror novel, with a really fucked-up Mulder investigating a child serial killer who finds a way--real or imagined, we don't know at the start--to get inside Mulder's head and mess with it even further. T.S. Eliot's poetry plays a central role in a wonderfully creepy way. This is Muldertorture (a subgenre I usually run screaming from) at its most Muldertorturous, and definitely NOT for the squeamish. It's also really, really good. I would love to comment on this story at the source, but it was written back when emails were the only way to comment, and I'm not sure the authors would appreciate kudos 16 years out.

3. If You Can See Where You're Going by

This fic isn't really unknown, but I haven't seen it recced in a while, so maybe some newcomers haven't read it yet. Isis calls it "probably the most all-out romantic story I've ever written", and it's definitely that, in a really good way. What it is not is a "Frannie-meets-someone-who-looks-like-Fraser-and-they-live-happily-ever-after" story. On the contrary, this story is about Frannie dealing with just that subject--the evolution of her relationship with Buddy goes from a crush on a Fraser clone to a real look at her feelings about lots of things--including Fraser, and including Buddy as a separate person. Buddy's line to Carol "What do you see when you look at me"? is dealt with here, and his line "if you know where you come from, you can remember what you wanted" is turned on its ear. And the framing POV is perfect. So, yeah, it's a romance--intelligent, fun, and damn good. You don't have to have seen Wilby Wonderful to enjoy this fic, but if you haven't, I'll bet you'll want to afterwards. :)

This is one of my comfort stories. I bet it'll be one of yours, too. You can give Isis love here, at her LJ.
Collapse